How AppGuard Protects Against Emotet and All Advanced Malware Threats

Emotet is an advanced Trojan malware that first appeared in 2014.The malware mostly spreads by spam and phishing emails via infected attachments and embedded malicious URLs. Everyone is susceptible to Emotet, from individuals to major enterprises and organizations around the world. 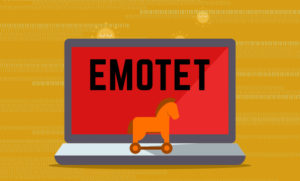 According to an alert from the U.S. Department of Homeland Security, the advanced nature of Emotet allows it to “evade typical signature-based detection.” This, and other sophisticated factors that make up Emotet, have led DHS to also designate it as one of the most costly and destructive instances of malware. A recent attack in the city of Allentown, PA ended up costing the city an estimated $1 million to recover.

The malware most commonly spreads through spam emails called malspam. The emails commonly have a financial theme and appear to come as a reply to a previous transaction by using fake payment remittance notices, invoice attachments or payment details. It then uses PowerShell macros to trick the user into opening an attached document to enable macros and trigger a PowerShell command which then attempts to download Emotet from compromised sites. Once initiated, the spamming process begins capturing contacts from the infected endpoint and delivering more compromised emails to those in the network and beyond.

AppGuard enforces these three key policies to secure the users system by enforcing the integrity of Operating System Design, effectively preventing Emotet and every other malware or advanced threat from breaching or causing harm to the system, including zero-day threats.

Test AppGuard for yourself. Fill out the form below to see if you qualify for Free AppGuard solo licenses. Testit in your lab, on your own personal system and throw anything at it. AppGuard will provide 100% protection from any attack.

Once you see how effective we are, we would love to talk to you about protecting your entire enterprise or organization and see if you qualify for a free vulnerability assessment.

Subscribe to our blog to receive email notifications when new posts are added!